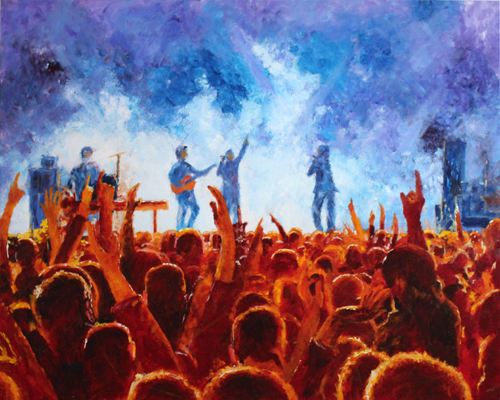 Moving Canvas Gallery was approached by Festival Towers to source historical images of the old Festival Hall in Brisbane for the reception and the lift lobby’s of Levels 4 – 41 and create four custom artwork commissions for the 4th floor podium and Lounge that reflected the Festival Towers former purpose as an iconic entertainment venue, and project manage the sourcing, framing, commission and installation.

Oaks Festival Towers at 108 Albert St, Brisbane City QLD 4000, stands among the many popular hotels in Brisbane city with 1 and 2 bedroom apartments built in 2006.

The Festival Hall was originally known as Brisbane Stadium, which was built in 1910. In 1958, the venue was demolished and a new building constructed, by then leading Queensland Construction Company E.J.Taylor & Sons, as part of the Centenary of Queensland. It was opened on 27 April 1959 and renamed Brisbane Festival Hall. With a capacity of 4,000 people, it was the largest indoor public venue, in the Brisbane inner city area and it remained the city’s primary indoor venue for more than forty years. It was designed in a postwar modern style, similar to its namesake, the Royal Festival Hall in London.